The Gospel of Mike Hill 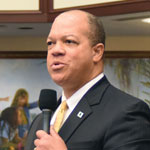 Northwest Florida state Rep. Mike Hill does a lot of voice impersonations. His recent post-legislative session appearance in Pensacola was peppered with them throughout.

A lot of the voices sound similar, a sort of conglomerate caricature that might feature nicely on a Saturday-morning cartoon produced by Fox News. Except for the voice Hill was doing now. It sounded different. Reasonable. Measured. It was the Voice of God, talking to the legislator about his so-called heartbeat-detection abortion bill, HB 235.

Hill was referring to the exceptions he’d begrudgingly allowed into his bill that sought to criminalize abortion if a fetal heartbeat could be detected. The bill—which, like most of the representative’s bills, never made it out of subcommittee—allowed for exceptions in the case of rape, incest and health-related concerns for the mother.

“It’s coming back,” Hill assured. “We are going to file that bill without any exceptions, just like we saw what passed in Alabama.”

Hill had at first seemed unsure about sharing his conversation with God—“I’m going to say this even though I know the press is here”—perhaps assuming the notion of the almighty wading into the weeds of HB 235 would seem weird for anyone not operating on the same far-right wavelength. But really, the revelation barely registered on the scale, as the event also featured a prayer paralleling the Biblical King David to President Donald Trump and a discussion about putting gay people to death.

Hill is a Tea Partier-turned-Trumper, an African-American with a soft spot for Confederate monuments who wants to give teachers guns and criminalize abortion. He represents District 1, basically the area of Escambia County north of Interstate 10.

The legislator’s May 23 local engagement was held a bit outside District 1, inside Pensacola City Hall. Hill was speaking to the Women for Responsible Legislation, an entirely receptive audience primed to talk about how illegal immigration is diluting the demographics or how Florida Agriculture Commissioner Nikki Fried took the oath of office on a box.

Hill was there to speak about his legislative efforts during the recently wrapped session in Tallahassee, as well as his plans for next year’s session. The legislator—describing himself as “a stick of dynamite walking around Tallahassee”—stays busy enough but appears a fringe element of sorts in the state’s capital, wearing his slate of failed legislative proposals like badges of honor.

A total of nine bills were sponsored by Rep. Hill during the 2019 legislative session. They pertained to abortion, guns and monuments, as well as more mundane items such as appropriations for asphalt at Pensacola State College. None of these bills saw the light of day.

Still, Hill had some good news to report to the faithful on behalf of the GOP-controlled state houses.

“This one is so cool,” Hill smiled. “We banned sanctuary cities in Florida.”

“Whoop-whoop!” came a call from the audience.

The legislator noted that the measure did encounter opposition.

“You would have thought that we were spawns of Satan, that we were the worst people on Earth, that now someone could get stopped for a traffic violation and get separated from their children and they’ll get deported back home,” Hill said, explaining that the law simply meant individuals in custody would be run against a federal database. “That’s all it said. And if ICE determines, ‘Hey, you’re here illegally; you’ve committed this crime; perhaps this isn’t you’re first one,’ then we’ll deal with you how they see fit, whether it’s sending you back home or what.”

And there was also the law providing funding for private vouchers for 18,000 students, a measure that critics contend drains money from the public education system and funnels it to private institutions not held to the same standards.

“Eighteen thousand is a drop in the bucket. I’d like to see that more widespread,” Hill said. “I don’t see why the dollars can’t follow each student, then let the parents decide how they’re going to be educated, whether it’s home school, public school, private school, internet school or charter school.”

Another success touted by Hill was the legislative effort to define the parameters of a constitutional amendment passed by voters in November aimed at restoring the voting rights of felons.

“What does it mean to complete your sentence?” Hill parsed the legalese of the amendment language.

Legislators determined that felons would need to not only finish serving any jail time but also probation and need to pay back any court-ordered restitution. Critics of this tightening of the amendment’s spirit argue that the move discriminates against the poor, who would be hard-pressed to meet the financial obligations.

Hill affects the voice of a critic, “And they say, ‘Well, some of them may not have the ability to pay back their restitution.’”

“Not my problem,” comes the response from the audience.

Red Meat
While Rep. Hill did address more mundane items pertaining to the legislative session—staking out ultra-conservative ground on matters like septic tank inspections, blue-green algae studies and texting while driving—the most notable moments of the legislator’s Pensacola appearance were built around the red meat of trigger issues like abortion, guns and immigration.

This was perhaps best illustrated when Barbara Mayall asked the legislator why he thought fellow Northwest Florida Rep. Alex Andrade had supported a bill offering protections for the LGBTQ community against discrimination in employment, housing and public places.

“Thank goodness that legislation didn’t go anywhere,” Hill said, explaining that the effort was a state version of a national Equality Act trend.

The legislator continued, explaining that being gay didn’t meet the standards of a protected status because it was “a choice.”

“It’s a behavior, and it’s a choice,” Hill said. “You can say, ‘But I was born that way.’ OK, well, fine, but nobody’s forcing you to engage in that relationship, even if you were born that way.”

The legislator then said he supposed Andrade supported the measure because he felt it would be politically beneficial but that “it is not the value of Northwest Florida” and that the lawmaker “needs to learn that.”

From there, the discussion sunk into some dark territory, where the red meat began to rot.

“In I Corinthians, it says that a man that has an affair with another man will be put to death,” said a man in the audience.

“Says that in the Old Testament, too,” Hill replied.

“Can you introduce legislation?” the man asked.

“Introduce legislation?” Hill laughed, almost seeming to sense the stink smeared on the walls of the hole he’d dug. “Yeah, wonder how that’d go over?”

——-
Editor’s note: The original article incorrectly listed Barbara Mayall has an organizer of the WRL meeting. She handles the announcements of the meetings but doesn’t have a role in picking the speakers or organizing the meetings.