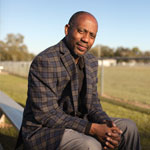 Rev. Theophalis and Mary May taught their son Lumon how to become a leader.

They showed him by working hard, acting unselfishly, getting involved in the Morris Court neighborhood, treating all people equally and always standing up for what is right.

Escambia County Commission Chairman Lumon May explained his philosophy in one sentence. He told Inweekly, “I want to be remembered as someone who tried to give back.”.

He recalls how a group known for dealing drugs stopped selling whenever his dad came around because of their respect for him. He remembers his mom overseeing the youth choir and young ushers and always volunteering as team mom.

“My parents had a good name and good reputation,” May said. “I’m a recipient of the good deeds of my parents.”

Theophalis and Mary May, who grew up during segregation in the Deep South, wanted their children to have opportunities never offered to them. Lumon absorbed his parents’ lessons and used them to become a popular and powerful force in Pensacola.

He ranks No. 1 on the Inweekly Power List this year for all of his actions and deeds in the community, many of which happen without any fanfare.

“I’ve never considered myself to be someone on the Power List,” May said. “I’ve just wanted to be in a position of service my entire life.”

A Servant Leader
That’s why when the teenage Lumon could not be found working for his father at May Construction Company building brick homes for the oldest black construction company in Pensacola, you could find him at the Salvation Army mentoring and coaching other children and doing odd jobs there.

At the University of West Florida, he served as the Black Student Union president and Student Government Association student advocate. He served former U.S. Senator Connie Mack III, a Florida Republican, while attending college, too.

May’s mission all along has been to improve the lives of the poor across Escambia County and to pull together Pensacola’s diverse communities. In his Escambia County Commission office, May keeps a poster that highlights “pockets of poverty” that he wants to change to “pockets of prosperity.”

It was his parents who taught him to overlook color by sending him to Pensacola Christian Academy. They encouraged him to play sports growing up at Salvation Army and also play baseball in the Bill Bond League of Pensacola. It gave the young Lumon the chance to grow up with a diverse group of friends—black and white, rich and poor.

Give Them Hope
In his family, May’s parents placed a high value on education. They viewed it as an equalizer when it came to opportunities for their children.

May went on to earn his bachelor’s and master’s degrees at the University of West Florida. Today, education remains vital to May.

In 2017, Levin Papantonio partner Troy Rafferty and his wife Ashley were shocked to learn that black students graduated at a rate of 63.6 percent, while white students had an 81.5 percent graduation rate. Rafferty approached his long-time friend May about the disparity.

Rafferty recalled over lunch he asked May, “What do we need to do to make a difference?”

May answered, “They need hope.” He explained that black students felt even if they graduated high school, they lacked the money to attend college.

That’s when the two created the Rafferty Hope Scholarship. The $50,000 award split each year between two underprivileged children helps to pay for their college education. Recipients must meet certain criteria, such as maintaining good grades, staying out of trouble and doing community service.

“No one in this community has made such a powerful and lasting impact on children’s lives than Lumon,” Rafferty said. “He makes such a difference in their lives that it’s unbelievable.”

That means passing out beads, toys, candy and Moon Pies at a recent Mardi Gras parade at Lincoln Park. The entire student body from Pre-K to 5th grade lined up by class under an awning where buses pick up the children.

During the parade, May created a traffic jam. He knelt to get face-to-face with the littlest students. He made sure to fill the bags of every student. At the Title I school, the parade included bikers, the Escambia County Sheriff’s Office Mounted Posse Unit and the thumping Warrington Middle School band. May outfitted every member of the band with colorful beads before the parade.

“It’s really about service,” May said. “How do you help some child realize their potential and reach their dream?”

Leroy Williams, founder and director of the Pensacola Community Arts & Entertainment, shook his head as he watched his friend’s dedication and passion.

“I’ve seen his actions, and I’m grateful to know him,” Williams said.

Working with Inner-city Youth
Serving as a commissioner isn’t his only job. Today, May continues to run May’s Construction Company as its co-owner. His dad started the construction firm in 1950 and built the Friendship Missionary Baptist Church, where he served as its pastor.

May recalls staying out of trouble because his parents made sure he attended church practically every day of the week. Similarly, the Southern Youth Sports Association (SYSA) co-founder keeps underprivileged, inner-city youth off the streets, too.

He makes sure they stay involved with the nonprofit’s sports, tutoring, mentoring, social development, after-school and GED programs at Legion Field and the adjacent community center named after his father.

May and his coaches often become father figures to the more than 1,000 youth who participate in SYSA’s programs. “Unfortunately, I’m one of the few male voices in their lives,” he said of the young men and women who come from single-parent households overwhelmingly headed by mothers.

The commissioner is particularly proud that many of his current coaches played for him and his lifelong friend Ray Palmer, who is the athletic director of SYSA. The organization has produced several college and professional athletes, including Doug Baldwin, Jr. of the Seattle Seahawks, Alfred Morris of San Francisco 49ers and Lady Comfort of the Los Angeles Sparks. However, it’s the young men and women who volunteer their time to SYSA that have become special assets to the program.

“Palmer and I have tried to create a culture of giving back to the community,” said May. “It’s very gratifying to see the kids come back and be role models for the next generation.”

Inweekly recently visited one of his basketball practices. Coach May pulled aside one of the high-school-aged players to speak to him privately. His mom complained to May that he would ignore and disrespect her.

“Life is tough, but you can’t be disrespectful to your mama,” May said. “Who’s going to be there when you need help? Your mama.”

Later on, May then gathered five SYSA basketball coaches to draft their teams from about 40 athletic high-school-aged boys. He lectured the group, “This isn’t just about basketball. This is about character building.”

May has always looked for ways to expand SYSA and for diverse experiences for its children.

For nearly 30 years, the premier youth football event has been the Soul Bowl, a daylong series of football games involving more than 400 youth from tikes to teens from the SYSA Tigers and the East Pensacola Rattlers. The teams play for the bragging rights of which youth program is the best.

When the Community Maritime Park opened in 2012, May and team co-owner Quint Studer discussed how to move the event to Blue Wahoos Stadium and transform the Soul Bowl into more than a rivalry football game. Their goal was to make it a celebration of community for all of Pensacola.

Over the past seven years, the Soul Bowl has become the inclusive community event they imagined. It draws more than 4,000 spectators from across the area for home-cooked soul food, public safety displays and other family-friendly festivities.

“A segment of our population would never play in Blue Wahoos Stadium without the Soul Bowl,” May told Inweekly. “The kids can play and watch themselves on the big screen, and even though they may never play high school or Division II football, 20 years from now, they can come down to this park and say they played in the stadium on Pensacola Bay. It has been fulfilling for me.”

Sense of Community
A year after he was elected District 3 County Commissioner, May saw another opportunity to build a strong sense of community.

He sought help from Studer and one of his former players, Dr. Karl Lewis, a successful Bradenton dentist, to create the Living the Dream celebration in 2013. The trio shared the vision of making Pensacola a better place by bringing people from all circles of life together to celebrate King’s legacy during the weekend before Dr. Martin Luther King Jr. Day.

Studer credits May and Lewis for taking the idea and organizing the annual event that brings together all shapes, sizes and colors of people to honor King’s vision.

May resides in Belmont-DeVilliers, not far from Morris Court where he grew up. He seemingly lives on his cell phone, receiving and sending texts and calls. He helps his District 3 neighbors who seek help to repair roofs, pay bills or feed their families by connecting them with the right people.

“Monica” calls him from Shanty Town, where even county staff refuse to go, May said. May listens and then gives her a name and number to call to get the help she needs. During the conversation, he recalls her two sons’ names and her daughter’s name.

After the call ends, May said about 30 years ago, he practically raised her boys, who both now have moved away and enjoy successful employment. Her daughter remains in Shanty Town.

Monica has remained grateful all these years to May, telling him before she hangs up, “You always helped me out with these kids. Your mama and daddy worked hard to put a good young man like you out here in our community.”